Cats, art and fashion – what’s not to love 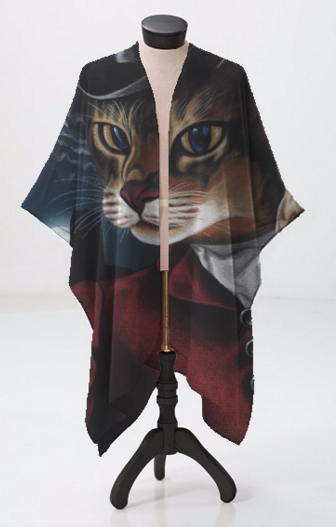 Do you ever see a business idea and think ‘I wish I’d have thought of that’?  When I first saw the VIDA collection I thought just that.  The concept is simple – get artists do the designing, source materials and labour responsibly,  print to order and the artist promotes their work – and your site.  Genius.

What I also really like about VIDA is that not only do they source responsibly and ensure that the factories used pay their makers a proper wage but also as a company they have set up a literacy and numeracy programme for the makers.

I suggested the idea to Jules (Bristol artist  Julian Quaye) and he said ‘anything that gets the work out there – let’s do it’ – and so the Julian Quaye Voices collection was born.

His fabulous feline characters  are an obvious starting point – Matilda, Tilly, Ginger and Flotty.  In Julian’s work each of this characters have their own back story.

Matilda ‘Billy’ Matiland the aeronautical explorer explorer who features in his Owl and Pussycat II was our first choice.

Matilda’s wrap I think is my favourite piece overall  but she also works rather well as a summer top and a rather cool pattern as a scarf.  I’m also hoping that with Glastonbury Tor in the background there might be some festivalers who might make her a must have.

Our next choice was Ginger – or Carolyn ‘Ginger’ Grant.  In the story Ginger is a cat burglar who was compromised by Albert Hitchcock to do his bidding along with her trusty companion magpies Kym and Novak.

I love the colours in this piece and chose a selection of garments featuring Ginger. 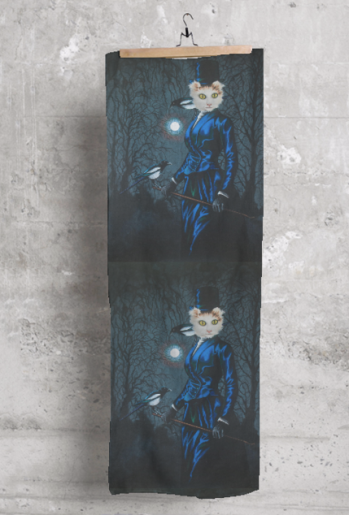 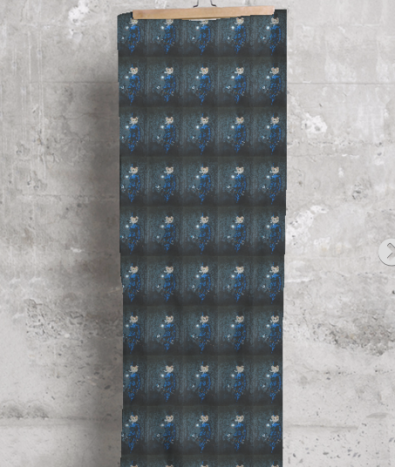 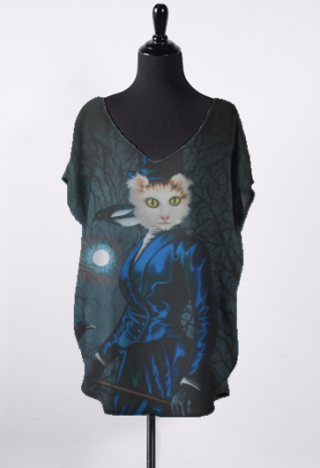 The real cat Ginger came to us as a competition entry to be featured in the miscreant moggie selection for The Mognificent Seven which she was far too beautiful for.  Jules was quite captivated by her and she fitted perfectly with a picture he wanted to use as his next cat character.  He started with a pencil drawing (which now resides with Ginger and her owner in Florida) before moving onto the lush painting above. 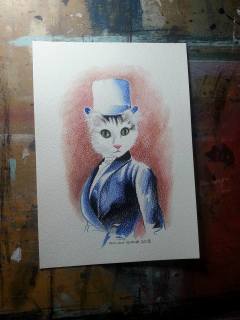 Tilly Swain was our next choice.  When I first started working with Jules nearly three years ago now he was just starting to vocalise the stories about his characters – they all have a back story which will one day be woven into a wider narrative – a kind of picture book for grown ups.  Tilly was one of the first ‘snippets’ he wrote:

‘The independently wealthy and handsome Ms Jennifer Tilly Swain and her constant companion, confidant and messenger ‘Missy’ the owl. Ms Swain has turned down many suitors in her time. A keen ornithologist and equal rights campaigner. A thorn in the side of the old guard.’ 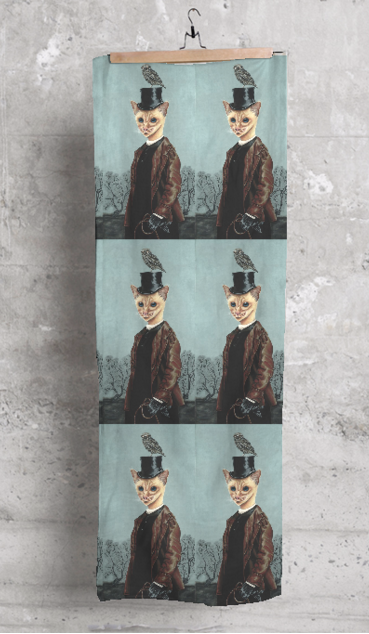 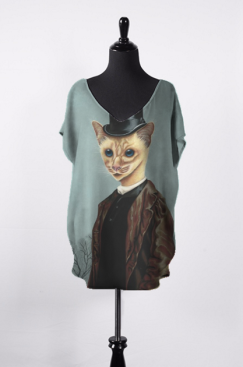 And finally we came to my own cat Flotty.  She features along with her brother Flynny as gang leaders in ‘The Mognificent Seven’

In this collection we also included a gentleman’s pocket square for the discerning hep kats about town.

I’m currently considering cushions – What do you think?