3 is the Magic Number – wonderful eclectic exhibition from Bristol’s artists.

If you are in Bristol go see this amazing eclectic collection of new work by some of Bristol’s finest.   There is something for everyone – watercolour, illustration, stencil, street, colourful geometry, crazy animals, fine art with a twist and even the exploration of the beauty of an empty spray can.  It’s bonkers, beautiful and surreal as some of the art itself.

I guess it’s what happens when artists curate shows – it’s an explosion of creativity, celebration of diversity of styles, a delicious smorgasboard of tantalising treats, a feast for the eyes – and a mind meld for the brain.

The show has been organised by four Bristol artists – Jimmer Willmott, Guts, Jemma Davies and DIFF.  Here is what they have to say about the show:

Guts: ‘The show came about from a discussion  about ideas for a group show. We decided on the name and concept as a way to get more artists in and reduce the pressure on working towards a show when most of us are really busy. Plus it’s a cool idea and the mix of artists and styles we managed to get is amazing!’

Jemma:‘Our main aim is to show off just how much artistic talent is out there. The artists in this show are a diverse bunch, so it’s a good way of bringing together a lot of styles and promoting local talent.’

DIFF: ‘I’m super exited to be involved with this show we managed to pull together 15 incredible artist from Bristol and beyond, lots are different styles it will be a joy to the eye.’

The brief was to provide 3 pieces of work – one A3, one A4 and one A5.  In talking to Jimmer earlier he said that most artists have done that, but some contacted him saying they had an idea for a painting in their head but it didn’t fit onto the canvas.  So we can say that there will be 3 pieces of art from each artist – and because of the size affordable art.  Ideal for anyone who is short on cash or space and who wants some original art for their home!!!!!

And so onto their chosen artists :

Andrew is on of the original Bristol street artists (he was using spray paint when you could only buy it in garages).  He is both the alpha and the omega of street art – his work having recently been described as ‘the next wave in street art’.   Whether on walls or on canvas his work is fine art with a twist.  It is simply stunning, using the rare ‘soak stain’ technique he redeveloped over an artistic career spanning fifty years.  His work is never obvious – as a viewer you have to look hard but it is always rewarded with a hidden message. 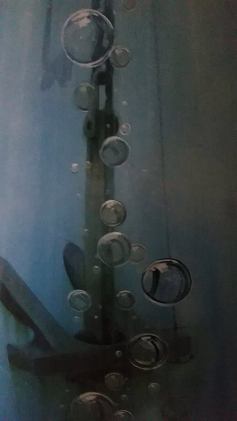 Of his three pieces Andrew says:

‘The inflatable Mr Smith’. Depicts how our inflated egos can sometimes put us into a dream world….dragging reality along like a ball and chain.

‘Bubbles…..’  Depicting how there can be so many different ways of looking at things….the Anchor representing basic sturdy reality….something we all rely on for stability.

‘Blind leading the blind’ Depicts how parents influence their off spring…for better or worse ….

Angus is a Bristol artist born and bred . He is the cheeky chappie of the exhibition with his works heavily influenced by his local community, popular characters and objects.  His work can be seen all over Bristol and he is a profusive contributor at Europe’s largest festival of street art Upfest in Bristol.

Bunny Boiler is a graffiti and tattoo artist who loves drawing on anything can get his ‘paws‘ on with a truely surreal cartoon style.  He says: ‘my three pieces for the show follow the thought of what’s inside a bunny ? …. of course more naughty cute bunnies getting smaller and smaller  ….’

Bunny boiler gave me this delicious teaser – you’ll need to come to the show for the full reveal! 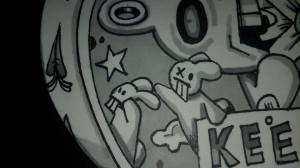 Czee13  is a Weymouth based artist.  For the show he has created 3 different sized metal plates.  He says: ‘They are an ON going series exploring Empty spray cans and the beauty they create.’

Diff is a multi-talented artist and  a creator of magical moments as you can see in his Shadow Ballerina from January this year as well as great pieces on canvas as well as walls. 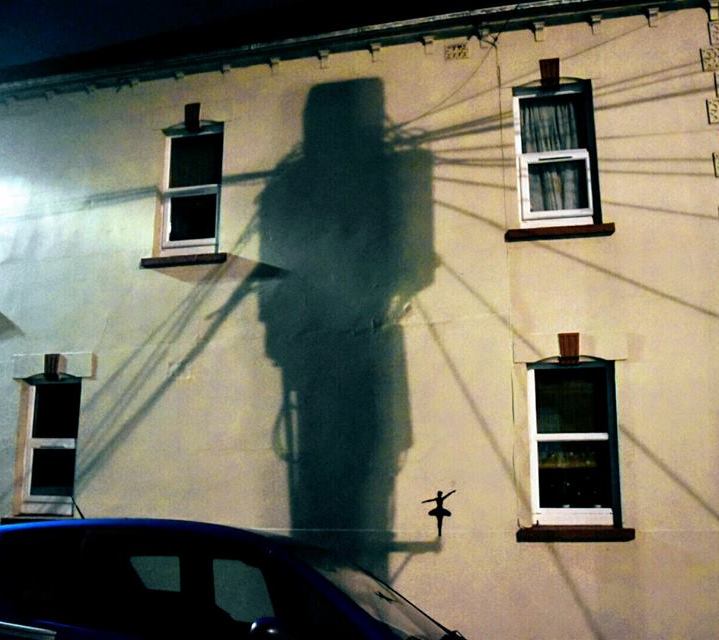 Here are two of DNT’s pieces for the show painted with spray cans together with a mixture of free hand and stencil.

He says: ‘I like to change styles quite a lot…so in this show i will mostly be showing landscapes….but that may change too…’

Emma studied at the University of the West of England (UWE) from 1994 to 1997 and gained an honours degree in Fine Art and her story is inspiring. Before 2008 Emma was an established Bristol based artist with awesome prospects.  Then on New Year’s Day 2008 she was seriously injured when hit by a speeding car.  Her injuries were so severe that she had to learn to walk all over again.

In 2014 Emma set about re-launching herself as an artist.  She said:

“It felt very different to be in business the second time around.  I’d been away for a long time and I didn’t have the same confidence as before”.  Her beautiful work tells it’s own story.

Guts is a Bristol based artist, in the lowbrow/cartoon style. He also loves spraying art on walls. He says his main influences are punk rock, cartoons, comic books and movies.

Guts: ‘My show pieces don’t have a running theme, just 3 ideas that have been hanging around in sketchbooks for a while waiting to find a canvas!’

Jemma is a graphic designer living and working in Bristol. Alongside her day job as a lead designer for an awarding body, she also takes on design and illustration projects on a freelance basis. Her lovely work has been featured in art exhibitions across Bristol.

Jemma: ‘My three pieces for the show feature two animals and one landscape. The natural world is my biggest source of inspiration and is a common theme in most (if not all) of my work. I work using a combination of pens, inks and watercolour.’

Jimmer is a Bristol based pop surrealist.  About his process Jimmer says:  ‘One piece can twist out from another and grow into something new. This is what truly makes me tick. Letting myself go wondering off on wild tangents of exploration, allowing old work to take on new slants and subject matter to create new work.’

He adds:  ‘I’m a painter that lives on his narrow boat home/ studio moored on Bristol docks. Being allergic to the normal I like to paint as much weird humour as I can in my paintings, it’s more fun that way.  I try to add as much detail as my skill permits, always trying nudge the bar a little higher.’

About this work for the show  he said: ‘Here’s sneak peak, a small smell of what I’ve been cooking up for Friday.  Lately obsessed with eyeballs.’

Julian is a popular Bristol mixed media artist and a jobbing sign writer and muralist.  His recent work features anthropomorphic characters whose stories interweave into what one day will be a book and perhaps even a film.

For this show Julian says: ‘I decided to have a bit of fun with these pieces.  Though still anthropomorphic figures I took a departure from my usual oeuvre.  I’m pleased with the Leopard and am now thinking of doing an anthropomorphic alphabet.  Animals beginning with X?’ 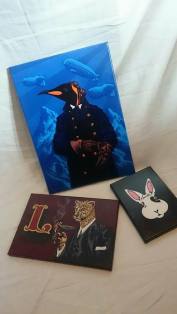 Lemak is a ever evolving self taught stencil artist based in Bristol with a love of sci-fi and the female form …everything he produces is hand made  and mostly from reclaimed or recycled materials.

His three pieces for the show are called ‘Hong Kong High Life’, ‘Ripley’ and ‘Peace Love and Happiness’. 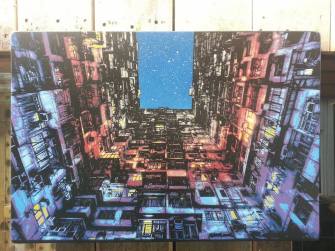 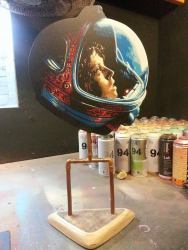 Lumagro was born in Porto (Portugal) and is currently living and working in Bristol. Drawing is his way of expression par excellence despite some incursions in collage and ceramics. He works regularly in collaborative projects with writers but he calls himself a scribbler more than an illustrator since he tends to favour the drawing process rather than final and definitive results.

About his work for the show he says: ‘These three new pieces are some of my most recent drawing experiences through which improbable and dreamlike atmosphere situations are depicted. The ambiguous meaning is increased by the way graphic conventions are subverted leading to different interpretations.’

Mr Selven is a freelance artist, illustrator, painter, muralist, aerosol alchemist and all round artisan.  You may know his collaborative work with DNT (also in the show) from Jamaica Street in Bristol.

South African born Neil Thomas Roberts, is now a Bristol based visual artist that mainly specialises in oils. His key themes generally revolve around the surreal directly influenced by the arcane, resonating with symbolic energy. Neil has been commonly described as an idea factory always twisting concepts into pictorial harmonies.

Neil says of his work: ‘My subjects generally resonate from a combination of occult visions, dreams, fantasies and interesting characters I have encountered in this jubilant yet mortal coil. My various works usually manifest in a symbolic and surreal style. I aim to transcend the realm of pure aesthetics and want my creations to serve an anabolic purpose.’ 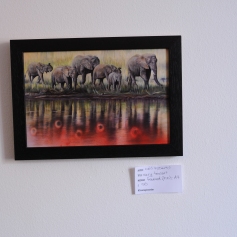 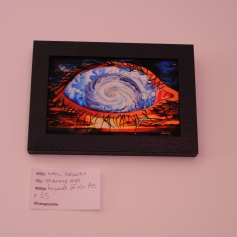 Bristol based charming illustrator – Pencil Girl’s work is lovely.  She describes her work as‘Mixing reality with a world of nonsense allowing everyone to laugh at life’s realities.’
Here are two of her pieces for the show. 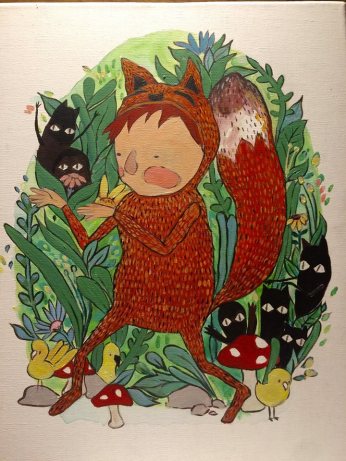 Influenced by film, television and cartoons from childhood, Paul ‘Monsters’ Roberts’ artwork brings simplistic, comical takes on things around him. With his more recent work he has been influenced by geometric shapes within society but keeping his own ‘personality in the pieces with pink brains/slime’.

Stewie is a Bristol based artist, illustrator and graphic designer.  You’ll have to go to the show to see his fab work – I’ve checked out his website – it will be worth it!

All the organisers asked me to thank landlady of the Ropewark in Bristol – Ann Clevely herself an accomplished street artist (AKA Bird).  Whilst you are there check out the delicious gastro menu – and you may spot some local talent weaved into the titles of the burgers – just sayin’.

All I can say is – go for a bevy – feast your eyes and feast your tums.  This is synergy in reality (with a whole load of crazy thrown in).