I’ve had a sneak preview of Andrew’s latest exhibition.   It is beautiful, strong and amazing work.  It challenges our view of where society is going economically, environmentally and socially.  There will be around fifteen new pieces which will have their debut at the exhibition – It’s a must see.

Andrew Burns Colwill’s new show 20/50 Vision: Tomorrow’s Habitat opens at It’s All 2 Much Gallery in Stokes Croft on 20 May and runs till 4 June.

“The show title, 20/50 vision, is a play on the term 20/20 vision and how my life experience has given me a slightly warped perspective of the world.

’20/50 vision for me has 2 aspects; firstly a point of view that sometimes makes people a little uncomfortable but offers a wider and alternative perspective to the norm, and secondly my interpretation of how we as a species may be faring socially and economically by the year 2050.”

Andrew was one of the first street artists in Bristol (when you could only buy spray paint in garages).   However, his art has always been in paint.  Of the the art scene in Bristol in the early 80’s he says:

‘In those early days Banksy and the whole graffiti scene was just coming up.  I had already done around four or five shops around Bristol and had four on Park Street at one point plus there were various pubs in Clifton that I had hand painted.  I wasn’t really involved with the whole graffiti or early graffiti movement.  I met Banksy on a few occasions around Clifton when he was spraying the trains doing his bits and pieces and hiding from the law. I remember when I was  painting a large mural at the Landsdown pub in Clifton and he used to pass by every now and again to watch me work and say hello – he was only a kid around 20 if that and I was around 30.’

‘I noticed the massive impact Banksy was making  when I was abroad and I take my hat off to the boy he’s done very very well.’

After leaving school without qualifications his talent meant he always worked in art from painting backdrops and scenic work for TV and theatre or on the streets like Blot on the Landscape and Robin of Sherwood in the 80’s.    At one point four buildings on Bristol’s (then popular punk scene Park Street) were canvases for his work including Zoo (punk clothes shop) and Trax (a mini market) .  Always a prolific artist he was constantly creating new work.  In the early days he used untreated canvas, developing techniques using curtain linings stretched over hand made frames and household paints just to get he work out there.

Those were the heady times which were fuelled and then broken by a time of addiction. However, Burns Colwill was not defeated like many of his friends of the time who did not make it through.  He recovered through rehab and took himself to Greece to escape ‘the scene’.

‘Greece to me was a mind rehab – it was a brilliant place, it was a gentle place to come down and change my life from the madness to stability.  I wanted to clean up – get off drugs.  I took off from Bristol in 1990 and went for a 2 week holiday.  After two weeks I decided I wasn’t going to come back to the problems, the drugs and the whole way of life so stayed there.  It was a good time.

‘For me in Greece philosophies and ways of life started to become prominent.  It showed me another perspective of life.

‘I kept on painting, people loved my work.  By the time I left most of the streets in lower Pathos was mine and Vicky (my partner)’s work in the restaurants, bars and discos.  This was from the hand painted signs outside and murals and artwork inside.

Andrew came back to Bristol in 2000, and the mediums he was experimenting with in the early days including soak stain techniques have become his preferred tools.  He is constantly developing and currently doing some amazing work including one on split ply wood into which he has aged and separated into individual sheets giving his ‘The Eight Ball’  an even greater depth and perspective. 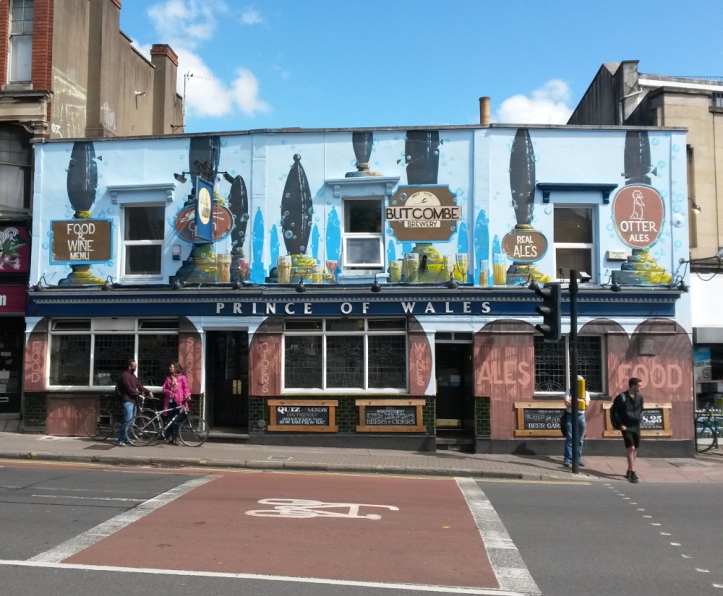 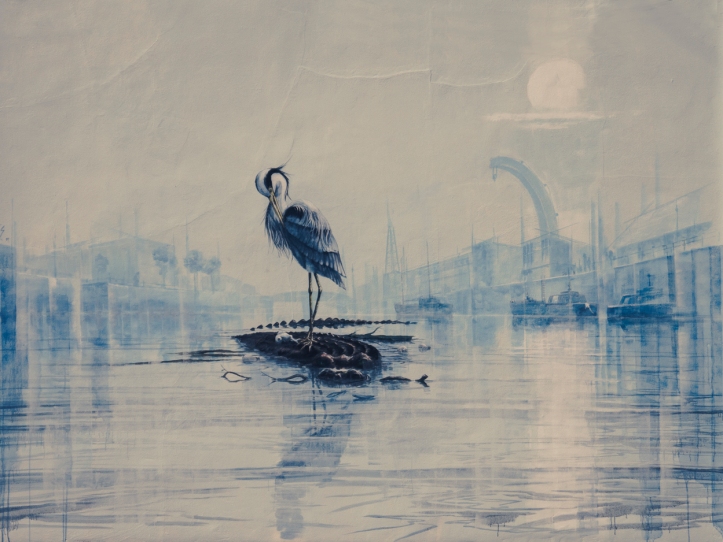 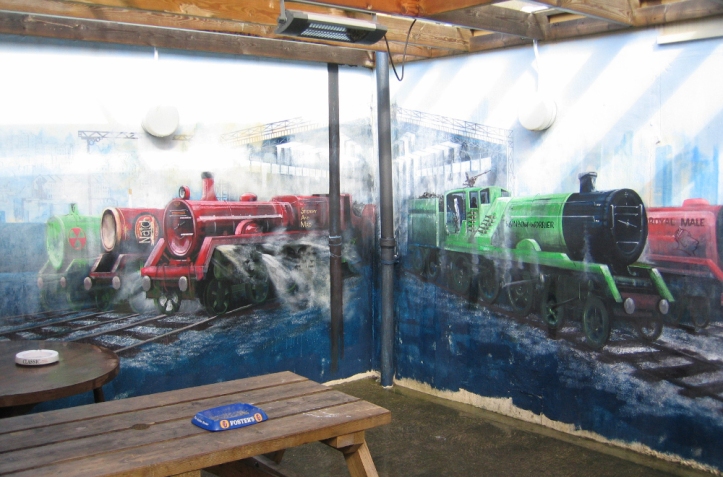 About the street art scene today he says:

‘For me the street art scene stands for a new revolution like the impressionists did at the turn of the twentieth century with Banksy as a pinnacle.  Inkie, Cheo and Nick Walker are all strong characters and going to stay strong characters in art history.

‘Street art takes it aways from the knobs and gives it to the people.  I am sure Lowry and Van Gough would be proud and they would love it.

‘Bristol is leading the way in street art and with Upfest and the fantastic hard work that Steve and Emma put in to making it such a success.  I’d wholeheartedly recommend it for anyone who is interested in art or street art.  I’m very proud to be part of it. It’s a great great show.’ 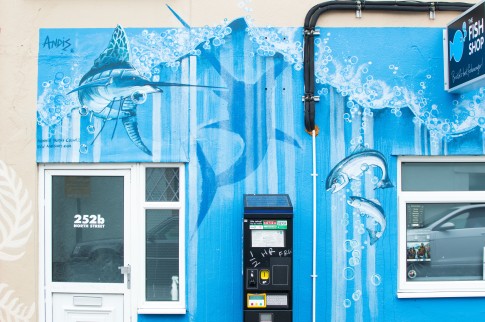 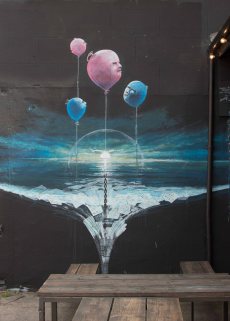 Andrew has been chosen again to paint at Upfest 2017.

About being an artist he says:

‘Art for me is not about the pieces that will be bought by banks, buyers, investment companies  and pension companies and stashed in a basement – I don’t agree with it but I fully understand it.  As long as I can earn enough to live on through my art I’m fine with that.  For me it’s about leaving something, a painting that talks to people, for everyone. ‘

‘That was what dawned on me on Greece that  I should do something with my art, say something.  That is foremost with me.   An artist should look at, try to understand and portray what he sees hopefully for the better, and before he dies be able to say something – that is important.

‘I don’t feel like I’m getting older because as the days go past see more and understand more which is fantastic.  So in one way you are becoming younger because your brain comes more lively and life becomes a little bit more lighter –  enlightened and that is very important as far as I’m concerned as an artist.’

Perhaps it is that enlightenment, which gives the depth and perspective that now defines his work.  His work is reflective, it is powerful in its commentary about environmental, political and social themes.    The exhibition will have around fifteen new works seen first at 20/50 Vision: Tomorrow’s Habitat at It’s All 2 Much Gallery Bristol.

About the exhibition he says: ‘In my new exhibition 20/50 Vision some of the paintings act as a warning of where we could go and also saying how beautiful things could be.  Like ‘Two Tribes’  which gives a format of the human race and how we are and how we could be.  A  gentle hippy type tree hugger person on one side playing chess with a soldier on the other. ‘

The works in his new show challenge our perception of how we will grow food and humans, our effect on the planet and how we will be fairing economically and operating socially by 2050.  Beautiful soak stained canvasses with hard hitting themes and being Burns Colwill there is a fair amount of dark humour thrown in too.