Thomas Dowdeswell pulls back the curtain on current, controversial issues with surreal political satire, challenging the viewer to confront, digest and empathise with multiple perspectives, both literally and theoretically.  His work is engaging, detailed, each brush stoke has meaning, during the last year and a half his style has changed dramatically.  I caught up with him to talk about influences on his work and how his work is developing.

At home Thomas was surrounded by art books from an early age.  He says about them ‘They were predominantly the Impressionists, Modigliani, German Expressionism they are at least the main ones I remember.  I think it must have filtered into my blood across the years and started to take shape when I was in my early twenties studying about the political climate post 911, the Vietnam War, Globalisation and the American body-politic.  It has been a natural evolution since I started in my twenties and continues to change.’

I asked him about the influences on his work ‘Two that stand out are Kasimir Malevich’s The Knife Grinder 1912 which greatly influenced my interest in geometric organisation and colour balancing and Pieter Bruegel’s The Triumph of Death c 1562 which highlights the everlasting struggle between life and death and is at once terrifying and re-assuring.  I am currently bingeing on Francis Bacon which is changing completely how I look at art and the cataclysmic events which unfold before us daily’

Earlier this year his work was in New York at the Art Expo.  Maxwell Chapman from Steidel Fine Art said of his work:  ‘Dowdeswell’s surrealist style creates a dreamscape atmosphere where he deliberately juxtaposes imagery of desperation and opulence, victimization and exploitation, in an attempt to explore the inequality of society through a flurry of abstraction and symbolism. When expressed through structural shapes, the form and energy is reminiscent of Futurist Umberto Boccioni’s Elasticity (1912).  But sometimes that flurry takes a complete abstract form, reminding the viewer of Kandinsky’s Compositions (1913), and thus the longing for liberation. Moreover, Dowdeswell’s faceless, indistinguishable figures have an uncanny resemblance to Salvador Dali’s  ‘creature’ in The Persistence of Memory (1931) reinforcing the obscure, dreamlike setting and reiterating the inescapable confusion of the human condition.’ 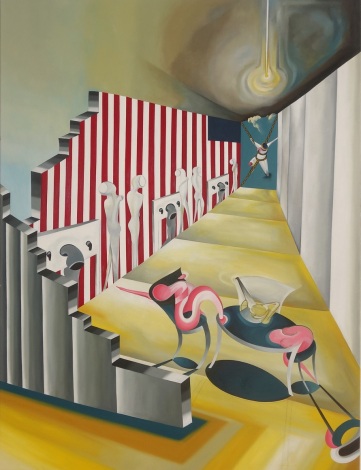 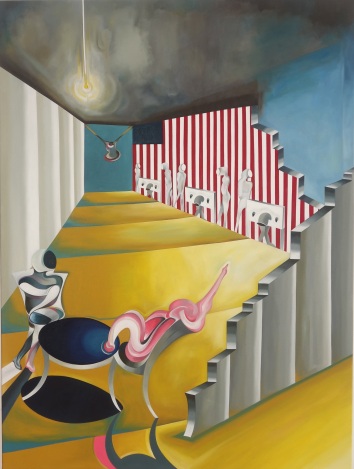 His work will next appear at Flux in London later this year.  He is showing the most recent of his ‘American Series’ paintings.  Wailing Wall Blues Pt One and Wailing Wall Blues Pt Two.   He says ‘The series essentially addresses the American/Mexican wall both realistically and hypothetically while also discussing our social prejudices, the dangers of bigotry, racism, sexism, ageism, econophobia, (I think this could be a brand new word!) a subconscious fear of both the rich, the poor, and the middling, as we judge others on unknown economic grounds) and the fear of unknown minorities which are for the most part completely unfounded but have generated an untold power over our social, interpersonal and intra-personal interactions.’

He will also be showing two smaller ‘Self Portraits. On the Edge of Something Special’ which combine photos mixed with abstract figurative explorations.  He adds ‘I am also nearing completion my first major sculpture ‘From the Hijab to the Hoodie” which may or may not be ready in time. Wait and see.’ 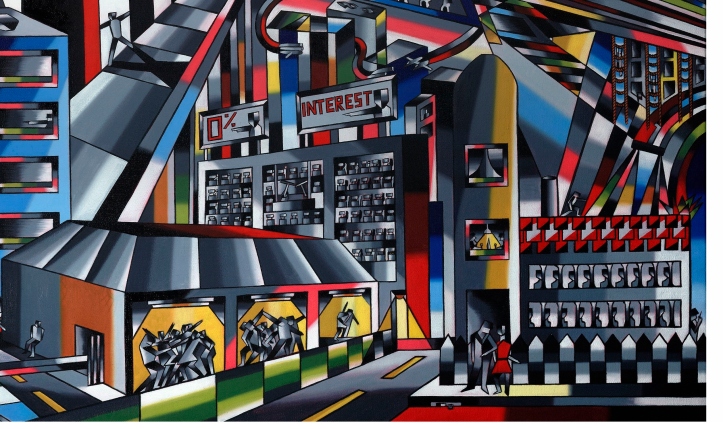 I am curious about his American series as it is very different to his previous work (Conspicuous Consumption above).  He said ‘I spent a long time exploring the geometric organisation of a painting, balancing shape, detail, colour and line and felt I had explored most avenues or at least understood how to make a detailed narrative.  I had lost some sense of spontaneity and began to crave a simpler methodology and way of approaching a painting.  It has been a most liberating experience, inspiring to the point of obsession.  I am a lot freer in my brush strokes and have experiment more with my palette introducing a great range of blues, greens, grey’s and pinks and have learned to be less concerned about mistakes or mis-representations instead enjoying how a piece of work has its own life force and exists at the end of my arm and direction.  It is this guiding role which I think is the most central to how I make a piece of art.  To be in control enough to begin and direct an idea but also to respect that I don’t have all the answers.  Like everything it is about finding the right balance between liberation and control.  Most important of all is to know when to stop-when a piece is finished.  In that sense my relation to my work has shifted a lot in just the past 6-12 months and my output increased.’

You can next see Thomas’ work at FLUX Exhibition in Chelsea 12-16 July.