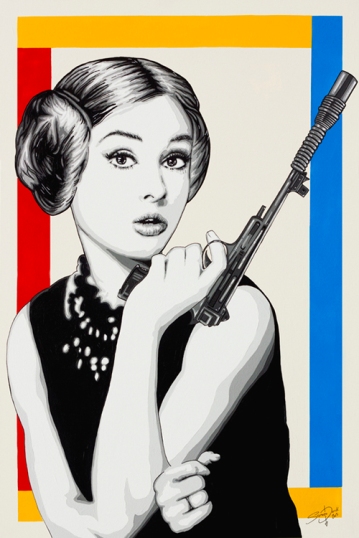 A full time artist since 2006 Bristol’s Stephen Quick has painted hundreds of paintings for people all around the world from England to Australia.   Stephen’s art represents contemporary culture by embracing and satirising our materialistic nature. His work is a mix of fine art and street art, mashing up media, as well as icons from different worlds.

Bit of background and how you got into art.

Years of expensive education within the arts left me really not considering doing anything else. When I left uni I did a ‘real’ job for six months and hated it so much that I maxed out a credit card and became an artist. I now sell work around the world, paint walls, hang out with some amazing people and make videos for a living. That was nearly 10 years ago now, so it worked!

Influences on your work

Todd McFarlane, the comic book artist, was my first art hero; especially his work on Spider-Man. Marker, Kubrck and Whedon influenced my love of video. C215, Rone, Warhol, De Kooning, Basquiat; all make me feel inferior, so I must love them!

Wow! Ummmm…I have run the SBA Paint Jam in Bristol for the last three years. I’ve been a finalist in the Kutz Stencil Prize and the International Stencil Prize. I’ve won the Paintworks pop up show and worked with Liquitex and Brandalism (wow, aren’t they two ends of the cooperate spectrum!) My videos have been on Sky and the BBC, and shared by lots of heroes on the internet (Nathan Fillion and Sarah Michelle Gellar, being my favs!) There’s other stuff, but I’m old and forget!

Live street events include Upfest, Cheltenham Paint Festival, Torbay Paint Jam and Fort Festival in Brighton. I’ve not even thought about what to paint yet!

Severus Sane – We were all heart broken when we lost Bowie and Rickman at roughly the same time; I wanted to honour them in a painting without it being a ‘jump on the death band wagon’. So this was painted on a tucked away wall in Bristol and I hope subtle enough to show my love and respect for them. I love that it is not a mash up of Bowie and Rickman, but a mash up of their characters; Severus Snape and Aladdin Sane. 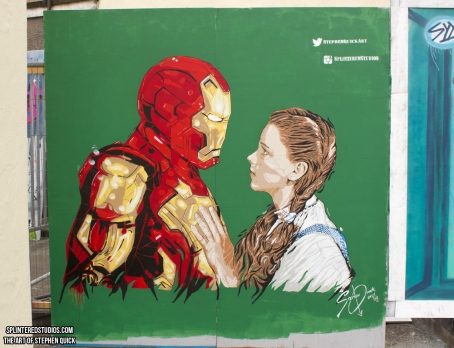 What is important to you about your art?

A balance between concept and beauty. Kurt Cobain screamed ‘Here we are now, entertain us’; I kind of live by that in my art.

Where people can find you at Upfest

I’ll be at The Rising Sun; the guy with long hair and a foot taller than everyone else, lol!

Can you tell me something about what you will be doing?

I’m creating a post modern, pop culture mash up of a hero. If we get called to arms, the kids from yesterday will arm themselves with The Sword of Omen, The Power Sword or a Lightsaber!

What are you looking forward to about Upfest ?

I LOVE painting at Upfest; the atmosphere is electric and it’s amazing to see so many artists come together to celebrate street art in Bristol. It’s also great to meet up with all the artists I have made friends with over the years.