In his new exhibition ‘Through the eyes of an Ostrich’ Andrew explores current society’s attitudes to climate change, political posturing and our collective responsibility for the planet for future generations.  I caught up with Andy at the weekend and asked him about the drivers for his new show.

‘This period of time seems to be more important because of our enhancement of some powerful weaponry where we have the capability of being able to mess each other right up if we want to.  People are saying ‘It will be alright someone else will sort it out’ and again it’s the Brexit thing that is bugging me too.  People just didn’t believe that it would happen and it did.  It might be for the good, no one really knows, I’m not a financier, but for me to be creating borders right now is suicide and that is what this show is all about.  People closing their eyes to what is going on around them.’

Of his new exhibition he continues:

‘An Ostrich has it’s head buried in the sand, worse than that it’s got Ray-Bans on.  This exhibition is about what I see things happening around and people just ignoring it, or not being aware of it, or being aware of it but choosing not to do anything about it but just carrying on with their lives.  This will cause us massive problems if we don’t start looking and understanding the environmental impact we are having for our children and our children’s children.  People have got to start waking up.  It is still a good time to act if we start opening our eyes and look at the planet we are living on and it’s resources.’

This new exhibition continues the theme he started earlier in the year with his 20/50 Vision: Tomorrow’s Habitat exhibition.   Here Andrew’s work commented on the possibilities of our way forward with technological advances in different ways of growing food, people and body parts. 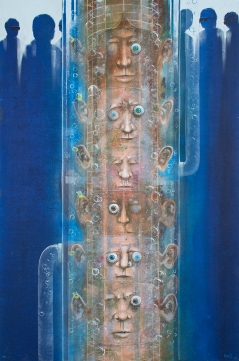 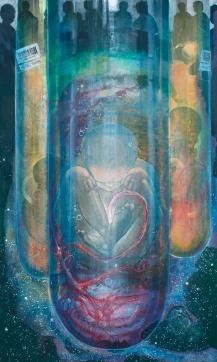 ….but with also severe warnings of what could be the consequences of our actions if we do not look after the planet. 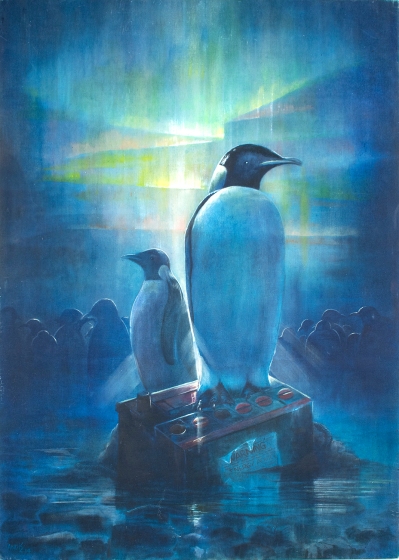 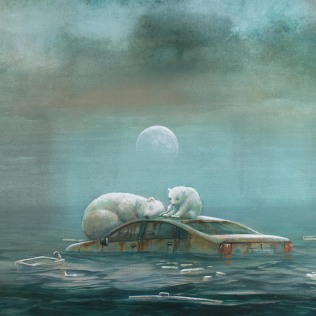 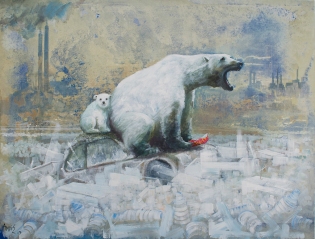 For him this work started around the time of the Trump election and Brexit – he says: ‘I think it became very important to me when Donald Trump got into power  and then Theresa May and the Brexit vote.  People like me started thinking we can’t go on like this.  I don’t want to put any political view point across but what I do want to do is to make sure that the planet is as safe as possible for our grandchildren whilst we are in this particular situation globally that we are in at the moment.   Some people seem seem bent on not only destroying not only everything on the planet but also everybody.  So my work has taken that sudden swerve to preserving what we can.’

I popped up to see Andrew’s new work this weekend ahead of the show on Friday and it is powerful stuff.  A harrowed figure watches helplessly through the window at plumes of smoke from the Twin Towers, the human ostriches in oil fields with technology as a manifestation and multiplication of our destruction of the planet.  The figures in sunglasses which have become so iconic in his recent work are repeated and put in the spotlight in this new body of work.

Sunglasses started featuring in his last exhibition particularly with the two seagulls in his ‘A seagull stole my shades’ paintings.  The caption for the paintings read:

‘A seagull stole my sunglasses once.

A seagull stole my sunglasses twice.

Could not afford another pair.

So I stopped wearing sunglasses….

Now I see a lot more, especially at night…..

A seagull stole my shades by Andrew Burns Colwill

A seagull stole my shades by Andrew Burns Colwill

Sunglasses also feature in his acclaimed ‘Arctic Scream’ at this year’s Upfest in Bristol.

In his recent painting for Cheltenham Paint Festival we see the wolf sitting on high ground and the sheep wearing sunglasses.  Listen to what Andy has to say about his work and the first mention of ‘ostrich’ country.

His new show will feature ten new paintings done for this collection along with a few from his earlier exhibition this year 20/50 Vision:Tomorrow’s Habitat.  It will be a feast for the eyes and food for the brain.  Highly recommended for people who are happy to leave their sunglasses at home.

Andrew Burns Colwill’s latest exhibition ‘Through through the eyes of an Ostrich’ opens on Friday 6 October 6pm.  Andrew will be live painting on Saturday 7 October from midday.  The exhibition runs till 26 October at The Ropewalk, 6 Nelson Parade, Bedminster, Bristol BS3 4JA (closed Mondays).