I first met Douglas at Andrew Burns Colwill’s unveiling of his amazing mural at The Stillage. (Andy then went on to win round 2!!). 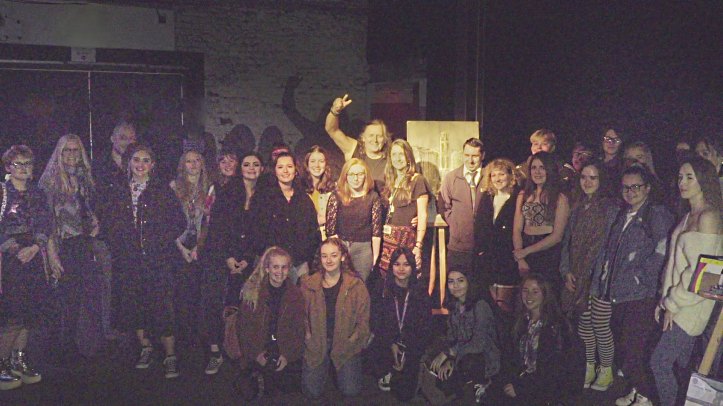 What really impresses me about Douglas is his enthusiasm, experience as an artist and chutzpah in just making this happen.  Art Battle audiences are growing steadily and that is down to his charisma and his really hard work behind the scenes.  The events are amazing – get to know Douglas here and book in for the next one – you will be very happy that you did!

Before you have a read – here is the gallery provided by Harry Bristol: 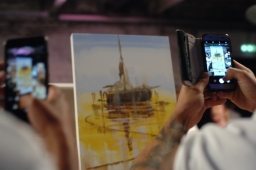 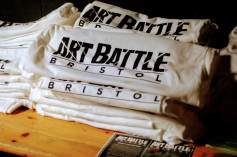 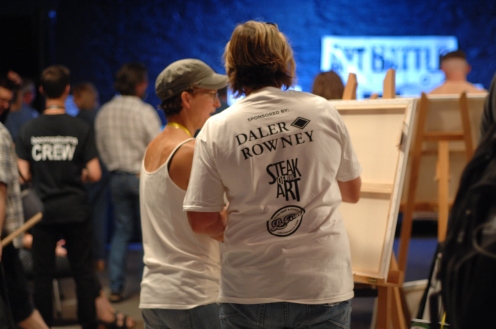 For people who don’t know Art Battle what is the history?

Art Battle International has been going for 15 years now!  Started as a sideline at another event, it was so amazing and well received that they decided to do it again and again.  It has been growing due to popularity and demand! Its now in over 16 countries with over 300 events a year.

How did you get involved and what is your role?

I’d been talking to Sven for a long time about doing something to support artists in Bristol when a friend of mine popped up on Facebook as having won “Art Battle” in the States (I am from the US).  Sven and I met through poetry and poetry slams and as we are both crossover artists, we saw Art Battle as a vehicle to bring art to the masses through democratisation much as Poetry Slams have ushered in a new era for spoken word. After some debate and trepidation, we agreed going through the international organisation would be of most benefit to Bristol artists and we went forward from there.

I produce Art Battle Bristol.  I manage and find opportunities for a the artists involved, promote the event to local press and around town and co-ordinate all the timings and logistics of Art Battle, keep good relationships with sponsors, keep track of the accounting and make sure artists get paid when their works sell and just generally make sure everyone involved with Art Battle has a good experience including artists, sponsors and audience.  I like to think of it as making sure all the gears are turning at the same speed in the same direction.

How have the 3 Bristol events gone so far?

I’ve been completely blown away by how fun the actual Art Battle itself is.  The first one, I don’t remember much as I had no idea what I was doing and was just running around making sure everything was working.  It was a bit of a crash course. The last two were a blast and a half! There were so many people and the piece Sophie Galliers produced is pretty spectacular. I can’t wait to see what she does in the next battle as the Feature Artist!  We’ve had the Lord Mayor Cleo come along and the art produced is really inspiring. It’s a great honour to be able to help manifest real opportunities for contemporary artists with so much talent and drive. Ian Price won the first battle by doing a portrait or Annika Wilkinson who was in the final across from him.  Andrew Burn Colwill won with a fantastic piece of a boat at sunset. Strangely, both of them only got to the 3rd round by 1 vote!

The next one is 13th November – who is in the line up?

Not all the spots are finalised yet but so far we have Tom Miller, Sophie Parry, Lisa Allen, Cameron Gelder (a student from Weston College of art! and Dante Turner!  We can’t wait to see what they come out with and who else will apply! The styles vary from photo-realism to illustration and fine art. It’s always a great mix.

Are there still spaces?  If yes what do artists need to do?

Each Battle has 12 artists.  We allow 11 artists to be accepted through early application and then save 1 spot for a wildcard who will be drawn from a hat from the audience to compete on the night!  If you want to compete, you can submit on www.artbattle.com/register

How many are there and when are the dates of the next ones?

We are doing as many as possible but normally one a month or every other month.  The next one is November 13th and then we will have an off season until January or February with a potential small event in at a Christmas market in December.

After the Bristol rounds then what happens?

We are trying to get the National Final into Bristol but that will be in 2019.  The winner of the National Final gets a trip to LA in 2019 to compete in the International Championship!  Not only that but we are also working on other multi-media (interviews, shows, etc…) to highlight the amazing artists who are working with us.

What has surprised you most about the Bristol Art Battles?

I’ve been really pleasantly surprised by how supportive the Bristol community has been around the who idea and format.  I’ve also been surprised at the amount of resistance I’ve come up against to the idea of art as competitive even through this is deeply rooted in the classical tradition.

What is something that no one else knows about Art Battle?

Managing artists is like herding cats!  But we have projects in the works to help promote artists through other media channels and we couldn’t have done it with out the support of our Sponsors Daler-Rowney, Steak of the Art and Live Ink Co.  There are three of us behind the scenes making all this roll in Bristol right now and we are all working for love and passion of the arts and artists. 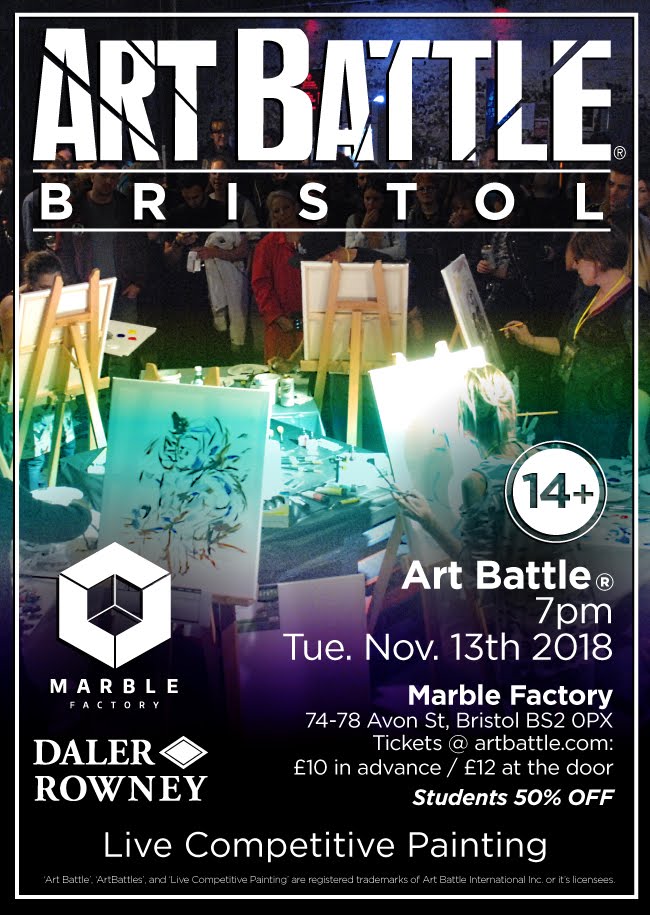 For more information check out the links and see you there!